Bivouac announces the 11 projects selected for its exhibition.

After a jury meeting composed of the architect Barbara Buser, the curator Simon Lamunière, the members of the Labor committee and the project leaders, we are pleased to announce the artists, architects and collectives selected for the BIVOUAC exhibition in June 2021.

The projects were selected from more than 125 proposals received.

Bivouac is a public event that will take place on the La Rasude in Lausanne. Eleven artists and architects’ projects will be created, inspired by the potential of the site, its constraints and possible uses. The people of Lausanne will be invited to discover the works exhibited through an itinerary that will take them, accompanied by guides, to explore the site, which has until now been closed to the public.

From March onwards, several collaborations will take shape around BIVOUAC, with the EPFL’s ALICE architecture studio, the Haute école d’art du Valais, La Manufacture school of performing arts in Lausanne and groups of artists and architects active in the region. All these creative energies will have room to express themselves and to exchange, both between themselves and with the public, during this temporary Bivouac.

What tools could enable us to develop new paradigms to respond to the social, political, economic or ecological changes awaiting our cities? How can we do this in a context of depletion of natural resources, climate change or social and demographic fractures?

New balances between individual needs, social projects and available resources must be imagined. BIVOUAC wishes to reflect on the diversity of these energies which seek to question current rules and habits, to find innovative ideas that will emerge from this troubled period.

With reference to the temporary camp, BIVOUAC is interested in the fragile, light, agile, transitory and moving forms of the city. The bivouac is a temporary space, open to improvisation, but always dependent on a strong environment. It shows the capacity of a group to define its own organisation. This bivouac will be conceived outside the restrictive and normative constraints of urban space, and will open up to more spontaneous and inventive forms of fabrication. The bivouac is in the image of the city that we propose to explore here: it wants to rethink the way we live, share and co-exist.

La Rasude site is a complex place, composed of buildings and rooves built at different periods and on different levels.

In this context and to facilitate the discovery of the site by foot, Bivouac proposes to create temporary footbridges that will allow the public to wander in an original way from one space to another, taken in small groups accompanied by guides. By entering the site on the station side (1), they will be able to access the imposing space of the former platforms (2). They will then take a temporary staircase and a footbridge (3) that will take them to the other side of the building and exit towards the Avenue d’Ouchy. Works could also be presented in the car park which occupies the first basement of the building (4).

This process is a continuation of the logic of work Séverin Guelpa has been carrying out since 2014 in contact with territories that are often extreme and threatened. After the California desert, the Aletsch glacier and the Mediterranean islands, he has pursued an interest in the built-up spaces of cities and the political, economic or ecological stakes they represent. In 2019, he initiated SUPERSTRUCTURE in two buildings under construction in Meyrin (Switzerland), where he took the public to discover artistic works created in dialogue with the current construction site. 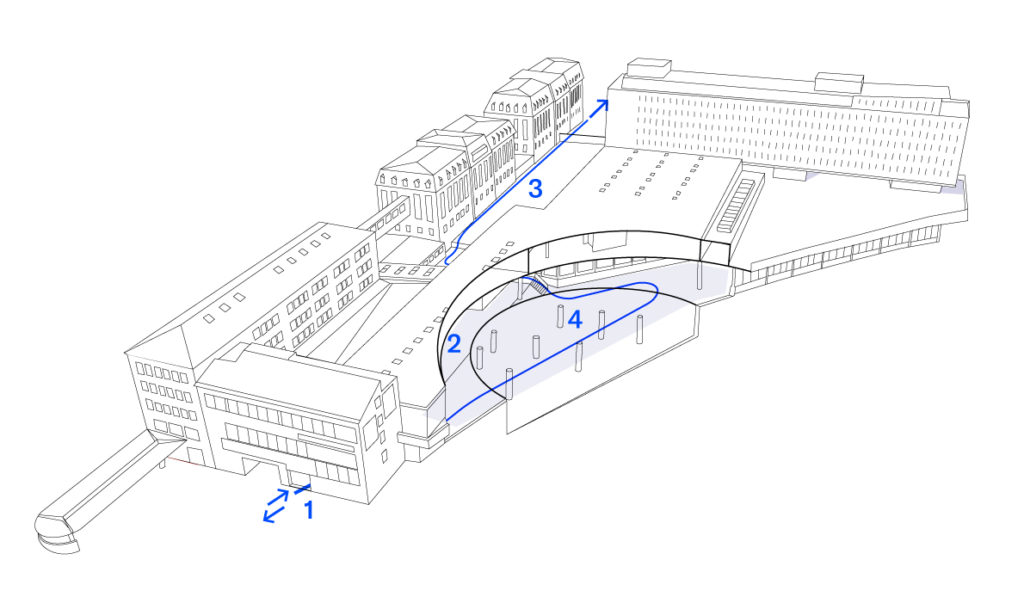 BIVOUAC is organised in the form of a call for projects launched on 1 December 2020 and open to professional artists but also to architects and anyone concerned in their professional field by urban development. Between 8 and 10 projects will be selected in February by a jury made up of art, urban planning and architecture professionals.